Richard Gunn, an African American attorney in Cleveland, Ohio, was heavily involved in the push for school integration. Originally from Kansas City, he moved to Cleveland in 1948 and after passing both the Ohio and Kansas bar, began practicing law in Ohio in 1949. In this interview, Gunn largely focuses on the integration of Cleveland schools, the state of the Cleveland school system, and the quality of education for African Americans. Gunn describes demonstrations in front of the city's Board of Education as well as his own personal experiences and feelings concerning the progress of the civil rights movement. In addition, Gunn describes Cleveland's largest employers of African Americans including the Cleveland Electrical Illuminating Company and the Ohio Bell Telephone company. He also discusses the substantial number of African American owned businesses in Cleveland. Gunn discusses the differences between the civil rights movement in the North and the South and also provides his own feelings on the role of young white people in the movement. 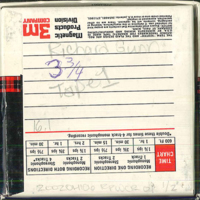