A group of college students from Jackson College discuss the civil rights movement at the time of the interview and their own participation in it. They discuss whether the general population of segregated places in the Southern states actually endorses segregation, and how the resistance to the civil rights movement is merely the actions of a very vocal minority. They also have discussions on Abraham Lincoln's views on race, W.E.B. Dubois' "great split" theory, the nonviolent approach to protest, and the difficulty of balancing activism and the life of a college student. 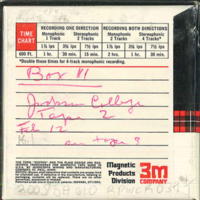