Tougaloo College was and is a Black private liberal arts college in Tougaloo, Mississippi (near Jackson), founded in 1869. A small group of people, approximately four to six, one of whom is female, speak; they are not identified in the recording of their interview. Warren discusses with the students the recent trial of Byron de la Beckwith for the murder of civil rights worker Medgar Evers. The trial resulted in a hung jury, with five voting to convict and seven opposed. They discuss whether the trial could have been rigged, and agree that even Mississippi's bothering to rig a mistrial would be a sign that things are changing--i.e., that the power structure knew national attention might make a simple acquittal disastrous. A female speaker expresses the opinion that if Beckwith is convicted in a later trial, he will not get the death penalty and will be pardoned after a short stay in prison. This speaker's skepticism about the motives of any white Mississippians leads Warren to probe the students on whether there can be an honest white Southerner and whether the African American's stereotype of himself has changed. (Note: Beckwith's second trial also ended in a mistrial, but he was convicted of Evers' murder in a third trial thirty years later, in 1994.) 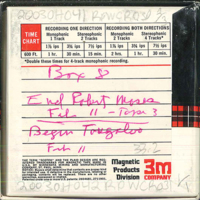