Carroll G. Barber was a white civil rights activist and anthropologist. He became associated with Fisk University in Nashville, Tennessee in 1961 and was arrested on July 15, 1961 in Jackson, Mississippi when he participated in the Freedom Rides. In this interview Carroll G. Barber discusses African American identity and Black Muslims. He discusses his belief in nonviolence and his experiences with civil rights demonstrations. Barber describes difference between the progress of the civil right movement in the North and the South. He also discusses differences between Southerners and Northerners as well as African Americans and whites. Barber describes how whites or other "outsiders" are perceived when they try to participate in the civil rights movement and tensions that may arise. He describes an experience he had in Memphis, Tennessee with segregation and concludes discussing the influence of a mob. 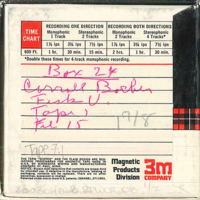