James Baldwin (1924-1987) was an American writer and nonviolent civil rights activist. Baldwin was born into poverty in Harlem, New York. At a young age he spent a significant amount of time in libraries and realized his passion for writing. Baldwin became a preacher as a teenager and at the age of eighteen began working for the New Jersey railroad. After leaving the railroad Baldwin met Richard Wright in Greenwich Village and began freelance writing. In 1948 Baldwin left for France funded by a grant that Wright had helped him secure. During his travels through Europe, Baldwin wrote numerous works about American society including topics such the African American struggle, interracial relationships, and homosexuality. In the 1960s Baldwin returned to the United States to participate in the civil rights movement. During his trip the South, Baldwin wrote The Fire Next Time (1963). After the deaths of his friends Medgar Evers, Dr. Martin Luther King, Jr., and Malcolm X, Baldwin returned to France to write If Beale Street Could Talk (1974). His works include Go Tell It on the Mountain (1953), Giovanni's Room (1956), Notes of a Native Son (1955), and The Evidence of Things Not Seen (1985). In this interview Baldwin discusses whether or not the civil rights movement is a revolution and compares the civil rights movement with the Algerian revolution against France. Baldwin also explains his statement regarding the power and influence of a mob. He discusses the forces of "hope" and "hate" in the civil rights movement and proposes what he would consider a perfect world. Baldwin discusses African American identity, the difficulty many African American's may experience identifying with Africa, and describes his own experience in Africa. He also discusses differences he has observed in the North and South, especially between whites and African Americans. In addition, Baldwin discusses African American leadership, the effectiveness of civil rights demonstrations, and identifies what he considers the principal responsibility of African Americans in establishing equality. 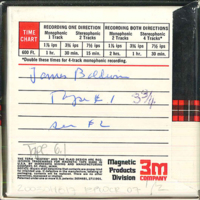