William Stuart Nelson (1895-1977), an African American educator and theologian, was born in Paris, Kentucky. After moving to Paducah, Kentucky and graduating from Lincoln High School, Paducah built and named a park after Nelson, Stuart Nelson Park, in the 1940s. During World War I, Nelson joined the Army and earned the rank of combat officer in the Second Army's 92nd division. In 1920, Nelson graduated from Howard University in Washington, D.C. with a bachelor of arts degree. In 1924, he graduated from Yale University with a bachelor of divinity degree. Nelson also studied in Paris, France at the Sorbonne and the Protestant Theological Seminary. In 1924, after graduating from Yale, Nelson began teaching philosophy at Howard University and became an assistant to the president. After leaving Howard, he became president of Shaw University in Raleigh, North Carolina and then became president of Dillard University in New Orleans. In 1940, Nelson returned to Howard to serve as dean and became vice president in 1961. While at Howard he started the Journal of Religious Thought and retired in 1968.

Nelson begins the interview by describing a recent trip to Africa and his discussion with an African political leader of Southern Rhodesia, [Sitole], regarding the nonviolence philosophy. Nelson furthers the discussion by providing his opinion on the strategy of nonviolence being used within the civil rights movement. African American history and the African American history movement are also discussed in terms of a social context. Nelson and Warren then revisit the influence of slavery on identity, discussing the white Southerner and his struggle to defend his identity within his culture. Nelson discusses the influence his travels had on his writings and his thesis expressing his opinion that is necessary for African Americans to view their problems in a world context. Nelson restates his interest in the philosophy of nonviolence and describes his participation in the nonviolent March on Washington in 1941. The interview concludes with a brief discussion of the effects of the civil rights movement on the youth who are devoted to it and Nelson's observations on the division in civil rights leadership. 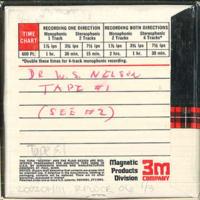